I was first introduced to Faso back in 2016 with his Soundcloud banger Minute. Back then, Faso’s sound was untethered but fun and made you want to be part of the moment wherever you were. 3 years later, Faso’s back with the same energy, but a much bolder sound. Reminiscent of a young Mac Miller combined with an older Drake, the Las Vegas artist mixes boastful wordplay with a playful flow. His production team is phenomenal with mixing as well, with a Radio-Ready sound on every track. Shout out OnTheRunRecords, the Las Vegas studio that Faso crafts his masterpieces within.

Playing a couple shows in Vegas, Faso has revved up his pace. Dropping consistent heat with his recent project, One Take and new singles Corner of Dreams, Side Gate, and Dura Drive all within the last 3 months, Faso has hit the ground running with no signs of stopping. His new project Stranger Things is set to be released in August and will be something you’re gonna want to look out for. I got the opportunity to ask Faso a few questions and gain insight into the man behind the mus

Faso: Motley Crue. Just in their energy, their cockiness, the way they interact with women. Top artist is Drake, Mac Miller, Nipsey Hussle, AC/DC or Guns n’ Roses… You know I couldn’t really pin it on one specific person for the last one. Just a lot of old school rock and roll. I’m a huge Green Day fan and Fall Out Boy fan as well. I play drums, I’ve been working with my band a lot. 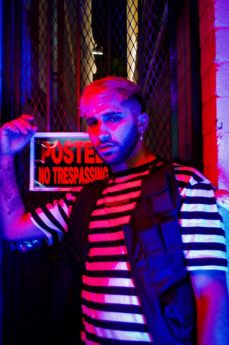 Rex: How long have you been doing this?

Faso: I wrote my first song in sixth grade. I don’t know if you’ve ever heard of the “I Am T-Pain App”, but you could put an autotune on your voice and then record songs and then have instrumentals on it. So I remember the first song I record was on there.

Rex: What can we expect out of the new project?

Faso: You’ll have to wait for the project.

Faso: Baltimore. Something coming on the Stranger Things project that is SURE. TO. SHOCK. PEOPLE.  Corner of Dreams is up there though…

Rex: Why the title “Stranger Things”?

Faso:  Because my come-up is Something Strange. The way that I rap is strange. My complete artistry is strange and it’s not like anything else, so anything you get from me is a stranger thing. It’s a lot of mystery, it’s a lot of curiosity. That’s what my whole aesthetic is. So that kinda sums that up…

Catch up with Faso’s releases on Spotify and Apple Music and look out for Stranger Things dropping August 9th.