Back in March we gave a heavy co-sign to Bad Boy, the first single off of Snowy Joey’s upcoming EP. The Chicago lyricist immediately impressed, seamlessly blending traditional hip hop with pop sensibilities. In his submission, he told us Snow 4 was dropping soon, and that we could expect catchy hooks, accessibility, and tunes meant to dance to. I had high expectations, and was worried the rest of the project wouldn’t match the quality of the single. I was thankfully mistaken.

You can always count on Joey to properly pay homage to the art of hip hop. Just check his discography. On Snow 4, Joey decided to go in a different direction. He challenged himself to make a true summer project – full of happiness, joy, and catchy tunes. Joey pulled it off with flying colors. While his lyrical skills are still in tact, the centerpiece is the uplifting content, joyful instrumentals, and the happiness that flows out of his every word.

We spoke to Joey about why he went in this direction, his early mixtape days, and his first memory of hip hop. Give Snow 4 a spin above, and learn more about the man behind the music in our exclusive interview below.

Good morning Joey! Thanks for talking with us. How’s it going?

Hey Julie! It’s truly an honor talking with you all. Everything’s alright, thanks for asking!

Great! So you’ve just dropped your new EP Snow 4. Tell us a little about it.

For sure! Well for starters, this is my fourth EP and while I was working on it one of my close friends jokingly said I should name the project Snow 4. Although he was messing around initially, the more we joked about the name the more it started to make sense. It’s catchy and there’s no other time I’ll have the opportunity to use this title. *laughs*

But in all seriousness I love having the opportunity to show versatility and growth as a man and artist and with this project I feel I’ve done just that. I believe this project shows how, as contradicting as this may sound, comfortable I am with getting out of my comfort zone and trying different sounds people may not be used to hearing from me. All and all, this project is very light hearted and full of sing along verses and hooks, and I’m excited for the world to hear it.

That’s so good to hear. Is this a reflection of your happiness in your life at the moment?

Oh yeah no question. I’m in a very good space right now thanks to God and the people I have around me and I believe it definitely shows in the music.

Your other projects were a little darker…very lyrical. Can we expect bars on this one? Or is it more about the vibe and feeling?

Oh yeah my last project titled See You Soon was indeed a bit darker and full of honest, home hitting lyrics. It was more so centered around me losing one of the closest friends I’ll ever have and as an artist I had to express that pinned up pain. Really good artists, (whether writers, painters,  photographers, etc.), really do a good with taking their consumers to a place where they could feel how they felt while working on a project. You mentioning how dark and lyrical it was really means a lot to me because that let’s me know that I’ve accomplished what I tried to. Thank you.

But of course you all could expect bars! As a rapper I know that the foundation of my songs have to be lyrics or else I’ll  feel like I’m doing myself as well as people that listens to me a disservice. It’s not as hip hop as my last project though. By that I mean there’s not a lot of 48-barred verses or songs that I rapped for 3-4 minutes straight with no hook. I tried my best to find the balance of lyricism as well as catchiness. I’m still growing as an artist though, but this project is more so about the vibe. With that being stated though, it doesn’t mean it’s lacking in lyrics.

Experimentation & progression is a good thing. So let’s go way back. What’s your first memory of hip hop?

Well, growing up my older brother used to listen to a lot DMX, Twista, Dipset, G-Unit, T.I., Wayne, Jeezy, Jay Z, Ye and a few other artists. Hearing these artists through him really made me fall in love with hip hop. The swagger and energy along with the skill they showed while performing and through their songs really inspired me at an early age.

How old were you?

I decided that a bit further down the line, during my years in high school. I used to freestyle and mess around with rap while in elementary but once I got to high school I began to write all the time and record music occasionally.

What did you record?

I recorded a few mixtapes! They were about 14 tracks long. I used to pass them out to friends and fellow classmates in high school. Doing that made me fall deeper in love with writing and recording music.

Did people fuck with it?

*laughs Oh yeah people did. Although that was some time back, I still get pictures of the CDs in my messages or just the “hey I’m still bumping your old shit” every now and then.

Has that sound changed?

Oh yeah no doubt about it. Don’t get me wrong some things haven’t changed, but I’ve definitely matured with my sound and have became more comfortable being myself and showing versatility in the booth and it’s easy to pick up these differences between my older and newer tracks.

When did you drop your first official project, and what medium did you release it on?

Okay so although I started making music way back in high school,  I dropped my first official project on August 30th, back in 2016. It was dropped on SoundCloud. 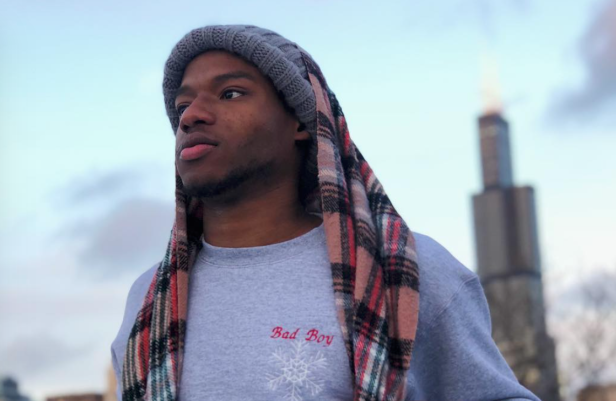 How do you feel you’ve progressed since then?

What genres or artists inspire you?

Is there any message you want to send on this new EP?

The only message I want to send is love!! Love always! Much love to the people that are taking their time out to listen to the songs. Artists spend hours on hours crafting out projects before giving it to the public and this project is no different. I just ask that if people like any of the songs  feel free to share it with friends and family.  Other than that, it was a pleasure working on this project and I hope each listener experience the same joy and vibes I had while going through the process of creating this.

Sounds like you do it for the art which is dope. Any last thoughts?

I just want to say thanks for taking the time out and talking with me, it was an honor sharing thoughts with you, and I’m excited for people to listen to this project and the things that are coming in the near future.