I can’t believe it’s here – our first compilation tape. Since the inception of flowsfordays I’ve wanted to put out a project like this. I wanted to develop relationships with artists first, and then begin to link with them on collaborations.

Riptide Vol. 1 is a very personal project to me. Each artist featured has made an impact on my life in some way. Many of these guys are from my city of Chicago, but a number of them live across the country. They’ve been supportive of the blog, often from the start, and I adore their music.The tracks you’ll hear are ALL exclusives – meaning they won’t show up anywhere else besides this tape. They are all hand picked by me, so there is no filler. The amount of work I put into this is hard to put into words, as the process started in March, and has carried on until this very moment.

Below you will see each song with a blurb with a quote from the artist detailing the inspiration for each song. I recommend reading the text while listening to each record.

I want to thank EVERYONE involved with the tape, starting with the very talented artist Wablo Picasso who worked with me extensively on the cover and back art. We will die putting out more volumes of this series, so look out for that announcement in the coming months. The tape is available for free download via Bandcamp (direct link), below.

The idea of WAV wasn’t anything spectacular. I realized I’ve been making more uptempo tracks and one night I was feeling particularly dark and found a nice sample from ‘The Internet’. Wanted to make something tribal yet futuristic, something with a slow build. It came together nicely once I added the drums and the druggy snares you hear in the background.”

The beat on this song I must have made like 3 years ago. I was really into boom bap stuff so it was one of many beats I made and then just kinda had lying around– back then I didn’t really do anything with most of my beats because they weren’t very good and I wasn’t that confident in my stuff to be sending it out to rappers. So I made the beat and then I hit up Rebel Legato on Twitter a little over a year ago for a collab. He was down so I sent him a few beats and that one was his favorite. He recorded that pretty quickly, within like 2 days or something, but then it didn’t really fit on the project I was working on at the time. It hasn’t really fit on any projects I’ve made since the track came together so when I saw this compilation project I knew it was the perfect track to send in.

My song “Elevate” was written based on how good the instruments made me feel when I first heard them. It’s something about live instrumentation that hits your soul differently than an 808.  The producer, Cameone, really did his thing w this beat. I just simply tried to provide some words to match the vibe. Lol it didn’t take me long to write because I felt so good about it that words started pouring out and I wanted to make a statement that people from my city should start keeping their eyes and ears open for AWillThaGreat.

I made this beat around December so the title is kind of self explanatory.  How I got the inspiration to make this track was because of one of my friends. We were talking about seasons and how she was born in the summer but loves the winter and I was born in the winter but I love the summer. So I wanted to show that contrast through that track.

Breeze – We Back II

We Back II is actually a part two to a song I released on a mix tape from 2012 (1 Man Variety Show) which was really just braggadocio bars about my current life and a feeling of making a “return” after a month (or what felt like years) of not having released anything. This kind of mirrors that message, and I borrowed the A-Boogie- My Shit (S/O A Boogie Wit Da Hoodie) flow in and out throughout the track. But the song as a whole is more poised and the production improved from the first “We Back” (Prod by Matcy P) Soulful sample, witty raps, my go to combo when i’m feeling conventional.

Legit, I couldn’t choose a better title and I love working with orchestral instruments, especially with deep brass and strings. I made this after playing Battlefield 1 for like a week and boom. It came to me and got to work on the brass and then everything else fell into place. 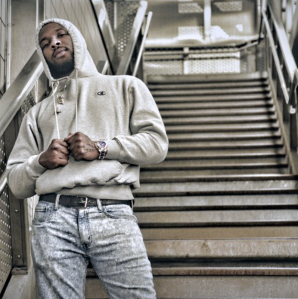 This joint was really just me spitting some thoughts that had been in my head, but the type of things the next person would think to voice via internet. I’m a bit of a reserved person so a lot of my personal feelings or experiences, you wont get from any of my social media accounts, (contrary to the use of a lot of social media’s inhabitants). All the way down to the way I release music, I try to be so far from commonality, that I literally use some songs to get things off my chest so that people can understand things about me. Whether they choose to or not is their choice, the info is there regardless. A lot of questions people ask about why I am how I am or do what I do, go where I go, is answered 99% of the time in a song I have, Wave does exactly that, line for line. It explains how id been feeling not only musically but just creatively in general, tying it together with a hook speaking on opportunists.

In SouthSide Jamaica Queens the only options for winning are dealing drugs, most get wrapped up in it until they realize getting money is the motive but not if it meant a losing time. “Tell em win” cause it’s hundreds of other ways to do so. Turn a negative into a positive winning situation.

Splndid both are from AL and no one has ever made music like us and we’re just on a different wave lengths than these locals cats. Hence “3rd Dimension.” 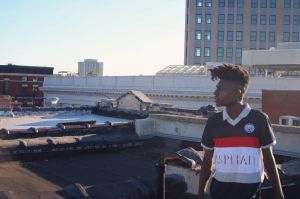 “Free Your Mind” is inspired by a time where I seemed to be focusing on all the negative things that invades our world. The song is simply just me going though my thoughts and telling myself that everything will be fine. I know that I’m blessed and through all the ups and downs I will still conquer. The song is produced by “Noize”. His beats have great vibes. We also have another track in the works for my upcoming project “BEE-4 I FLY AWAY”.

Kiraly and I went to SAE Institute to record. The beat is produced by ILLA who’s a student there. We’ve all worked together in the past on Kiraly’s “Z” project. When we heard you were doing the compilation tape for Flows it was a no brainer.

I pieced together my verse from some other rough ones I had on my phone as well as freestyle some parts of it. The beat inspired me to approach it energetically which fit the dynamics of the beat. I knew that I wanted to say things that would catch people’s attention while staying socially relevant. Overall it’s not the best quality due to the recordings themselves and lack of stems for the beat yet I’m pleased with it.

It’s an addiction compiled with thousands of emotions, experiences, concepts, ideas etc.. that I try to capture and display. It’s something I feel I can continue to do forever, whether or not people hear it.”

Break was more of a deeper meaning to it. It’s pretty much just when your broken down and your really going through hard times but you know that your future will have a bigger upcoming. me and my homie both go through rough times but we both know that our future will be better.

So January 16th, the night before my birthday, my engineer/producer Thibault (T-Bo) and I recorded 7 songs in 4 hours. The last song was Free Promotion. I was in the booth and he jokingly said “you got more?” Because T-Bo is the first to hear all my songs before I hit the studio, his face was just in awe as I rapped a song he never heard. So as I’m rapping this song in one take I can see him laughing at all the bars and I’m trying not to mess up At the end u hear me finally laugh cause we both just didn’t know what to do or even what I just did.

Austin Fair – Hold It Down

Hold it Down was actually a song me and Hum did in like 2015 that has aged like fine whine. When I asked him for that classic beat twist in the middle I kinda was just like “What if we have this cool wavy rap song and then piss off the old heads right in the middle and turn the fuck up?” Humbeats always delivers, and then we have Hold it Down.

The creative process for the chorus came in a time of dealing with loss of family and friends. I coped with those times by telling myself that their love and memories would stay even though they were gone. The verses were a little different, I simply just wanted to show a more aggressive type of flow and incorporated what I believe is some good wordplay there.