Last year I interviewed Chicago based group Blaqrock. They first caught my attention with their debut album No Love For Blaqkid; incredible music that blends the best elements of every genre you can think of. I learned about each group member, their humble beginnings, and their goals moving forward. You can read it in full here.

Since then they’ve headlined at notable Chicago venues such as The Elbow Room, The Metro, and Cobra Lounge, and more. They’ve played alongside amazing hip hop and rock artists, showing how versatile they really are. With hard work and perseverance, Blaqrock achieved a monumental goal by playing at The House Of Blues in September.

The content continues to come with their latest single Mass Appeal (below) and upcoming single Kicks which you can pre-save here.

I decided to check in with the group and hear about what the last year has been like, and what they hope to achieve moving forward.

First of all, it is an honor for me to be able to talk to you today. I am a huge fan of your work. How’s everyone doing?

Danny: Hanging in there when work and life are bringing me down. And fortunately, I got this band and some great bandmates to keep me going! I’m also glad to be a part of this interview. All in all, I’m making the best of things.

Myles: Thanks for the love.  We definitely appreciate your continued support.

Your manager sent me a highlight reel of some of your shows and I instantly noticed how involved your crowd is. How does this affect your performances?

Gardner: It gives me confidence, it makes me happy. It’s nice to see people involved and that they care, it’s cathartic for people to care about us.

Myles: The crowd being involved is really a unique thing.  Especially being a band that has definitely played their fair share of empty rooms.  Playing to a crowd and having them involved is a reward.

Austen: I feel much more affected when the crowd is in it with us. It’s so much easier to give the performance your all when the crowd is pushing and pulling with you. Not to say we need a crowd either, we’ve brought it to shows that unfortunately didn’t have a huge turnout and we still brought it down.

We’ve covered your music going all the way back to your early 2017 tracks Southside and About The Music Interlude. Tell me about this time in the band’s career.

Gardner: That time was a rocky time, around that time our line up was going change and we still tried to get music out on the internet, we didn’t have Apple Music or Spotify distribution yet. We still didn’t have money to pay for professional studio time but now it’s more feasible. It was an interesting time.

Myles: Different lineup, different band, definitely in the past. It was a time for growing for Gardner and I. We didn’t know wtf we were doing. We were going full speed without knowing how to actually drive the car.  My hair was shorter too.

Austen: That was before the time I was personally in the band, but it’s funny to hear about everyone’s memories and perspectives from that time. I’m glad certain aspects of the music from back then have remained and still influence the direction and music that we make now.

Danny: This was around the time I joined the band back in June of 2017. We were all eager and excited to create something different. Personally, I was still learning my sound when it came to the drums. For the most part, that time was spent learning about each others’ sounds and styles. 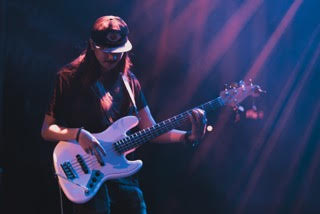 Each of you has such mastery in your respective instruments, and are incredibly captivating while playing them. How did you individually learn how to play and what made you start?

Gardner: Well, I’m always still learning about my vocal range and what my limits are. I think what helps me is listening to singers constructively and singing and rapping constructively. I’m still learning, rapping is still something I want to improve but, I’m always happy to do what I can that’s all you can at the end of the day.

Myles: My parents got me a guitar when I was 11. The year before my older brother had gotten a bass for his birthday.  He printed out tabs for 100 songs..so I just started with those songs.  All rock/metal songs.

Austen: I didn’t start playing bass until my senior year of high school, so comparably pretty late to other musicians our age I feel haha. I had to do a lot of catch up. But I was lucky to be in intensive performance experiences early on in my playing career and to have worked with one of the best bassists in Chicago, Dennis Carroll, who really helped propel my playing and musical understanding. What drew me to the bass was the huge, earth-rumbling sound. I played drums before that, and I had some dabbling on electric bass, which I actually hated at first. Then my high school was finally able to afford an upright bass, and since I first touched it the rest is history.

Danny: I had some inclination to music at a young age. I had a neighbor who taught me how to play the piano using solfeggio instead of the typical musical alphabet when I was around 7 or 8 years old. I pretty much dropped interest in piano for a really long time. The drumkit came into my life when Rock Band became a huge music video game. I had developed a little coordination playing the plastic drumkit. What really got me going was when my uncle let me store his drumkit in my room around the time I was 15 years old. Since then, I’ve been glued to the kit.

You’ve performed all over Chicago. What has been your favorite gig and why?

Gardner: I really enjoy the house shows.  You can connect with audiences better.

Austen: My favorite gig is one of the latest ones we’ve played, House of Blues 9/19. The energy, space, and stage were all amazing. One of the best sound systems I’ve ever played out of, and we had a really great crowd there to support us

I was so excited to hear about The House Of Blues.

Gardner: It’s a blessing, it really is, we all been through a lot and it’s nice to see a venue like this to have us.

Myles: The house of blues for me topped every venue growing up. It was my goal to hit that stage. I’ve played their once, not with BlackRock, so it wasn’t as fun.

Austen: The House of Blues is such a well-established venue, it’s a really exciting opportunity to reach a bigger platform.

Danny: I’m just now starting to fathom the significance of this show. I have never been to HOB let alone perform there. Even my friends are telling me that the HOB is a big deal.

I love how selective you are about the music you put out. You don’t bombard streaming sites with tons of singles and EP’s and albums to consume. Is this done intentionally, or does it come naturally?

Gardner: Ha, it definitely our intent for now.

Myles: Combo of both.  We have learned how to appropriately feed the market.  We’ve learned it from doing it wrong for a long time.

Danny: The speed of writing new material always varies so we try to put out content whenever we can.

We spoke shortly after you released No Love for Blaqkid EP in 2018. Do you have any memories or thoughts looking back at that time?

Gardner:  It wasn’t an easy time for me personally. It was an old version of me that is recorded. Even when I recorded it I was referring to situations that happened from 2015-2017. My memories back then were more stressful than now. I can recall a time when we were getting it recorded at our student buildings and the process was awful, too many retakes, we were messing up, the sound wasn’t mixed well, and people weren’t reliable.

Myles: We are able to literally call that the “no love for black age” now. It was great.  That’ll always be our start. But now we get to move to the next chapter,

Austen: Having not worked on it, I can’t have that perspective necessarily, but I love the No Love for Blaqkid EP. I think it’s a great starting point for this band, and I have always thought the songwriting and delivery on the album were great.

Danny: The release of that album was a turning point for me. I didn’t have any recording experience prior to this time so this album really taught me to be diligent with my musicianship.

Do any of you have a song you love to play the most?

Austen: I have a lot of fun for various reasons throughout the set, but one of my favorites is the new single Mass Appeal. You just get to go off haha.

Danny: I really enjoy playing Kicks. The verses allow me to play with dynamics keeping the momentum. Plus, I love to go all out during the choruses. There’s a new song well that will perform for the first time. I hope they like it.

I’d like to close by asking how Blaqrock has affected your life, whether good, bad or in between.

Gardner: It’s been an up and down journey, it’s been a positive source in my life for sure, it’s one of few places where I can be performative and it’s genuine at the same time. Blaqrock gave me a chance to be someone I always wanted to be 15-45 mins at a time it’s nice to make someone’s day better with me being passionate about my words and body.

Myles: Blaqrock has been where I’ve learned the most about everything from writing to the biz side of music.  It really means everything to me.

Austen: It’s given me a group of people who I feel really banded together with (band heh). I’ve always looked for that within the Chicago music scene, and it’s been hard to find, and so it has really given me a lot. I am very grateful for the band and I have found each other and it has affected my life positively, giving me a space to create and play in a new group.

Danny: Blaqrock has definitely forced me to develop an open mind with all styles of music. There are so many genres and styles of music we can pull from. On a personal level, being in Blaqrock opened opportunities for me in terms of drum sesh work. Getting my name is one thing that every musician strives for and Blaqrock is that band helping me get to that point.