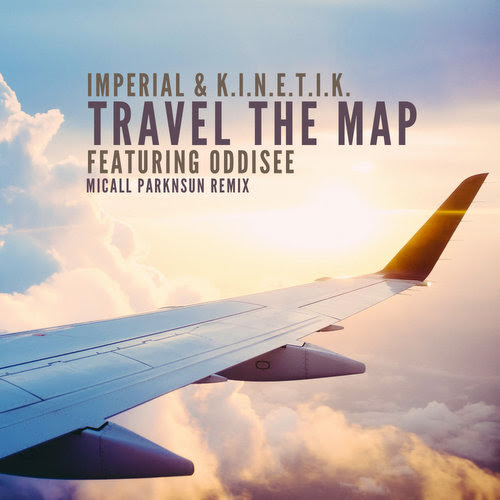 Imperial & K.I.N.E.T.I.K. just dropped a remix of “Travel The Map,” and few songs that have come up in my submissions inbox have caught my attention from the very first listen as much as this gem did. The remixed instrumental, produced by Micalla Parknsun, is laid-back and jazzy, which is shown in the eerie piano loop and staccato bass that thumps along throughout. Though there is a sharp contrast between this one and the original instrumental which was produced by Imperial, Parknsun’s re-imagining of this song is organic and beautiful in its lo-fi tone.

Oddisee, who comes on as a guest artist on this track, handled the first verse and displayed his lyrical mastery as he often does. His flow and delivery come off smooth as butter as he reflects on all the places he’s been.

K.I.N.E.T.I.K. comes through with a worldly verse of his own. His verse comes off every bit as poignant as Oddisee’s. His worldly travels continuously bring him inspiration as he says that visiting all of these new places exposes him to new truths and ways of life.

“Travel The Map (Remix)” is an underground rap nerds’ wet dream. Between the lo-fi, jazzy instrumental and deeply conceptual bars from Oddisee and K.I.N.E.T.I.K., this gem proves that there is still plenty of hip-hop out there for backpackers and purists alike. The way Oddisee and KI.N.E.T.I.K. weave together narratives on their earthly travels instantly reminded me of “Paris, Tokyo” Lupe Fiasco.

“Travel The Map (Remix)” is now available on all streaming platforms, and can be listened to by clicking on the youtube video above. This one song just might make you pack your bags and embark on a spontaneous trip.