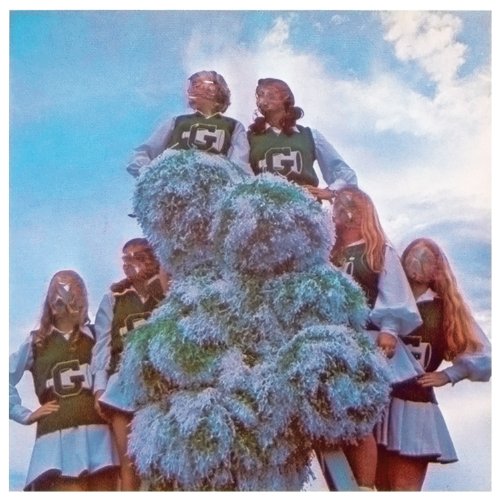 For over a year flowsfordays has focused on sharing hip hop music from independent artists. While I listen to hip hop the most, some of my favorite albums of all time delve into punk, rock, electronic, R&B, experimental, and more. As of today I am starting a series highlighting albums that don’t fall into the hip hop category – in hopes that it may compel my readers to give it a listen.

Today is all about Treats – the stellar debut album from Sleigh Bells. There are 3 sections to this piece. I start things off with the background of the group, my personal experience with the album, followed by the actual review. I recommend playing Treats while you read along to fully grasp what you are listening to.

Background on the group:

Sleigh Bells may have never been if lead vocalist Alexis Krauss hadn’t dined at producer Derek Miller’s place of work – a bistro in the heart of Brooklyn. Alexis’ first experience in the arts was theater and television, appearing in a community production of the musical Annie, and starring in a Nickelodeon Magainze commercial. Alexis still dabbled in music, performing in a teen pop group from her early tweens until the beginning of high school. She put her dreams aside to attend university in New York, majoring in political science and teaching Spanish at a grade school in the Bronx. Still, she couldn’t shake the music bug – often performing at weddings to feed her need to sing.

Backtrack to Derek – a Florida native who picked up the guitar at an early age. Oddly enough he played in a hardcore metal band at the same time as Alexis’ venture into music – perhaps the first sign that they were meant to be. In later interviews, Derek said he never wanted to do anything else but play music; a similar sentiment to Alexis. After removing himself from the band, he moved to NYC – strictly to find a lead female vocalist for his work in progress demos.

Derek and Alexis found one another in an odd scenario. One day Alexis and her mother decided to have dinner at a Brazilian bistro where Dereck just happened to work as a server. He got to know both mother and daughter throughout the meal, briefly touching on his need for a female vocalist. Alexis’ mother volunteered her as a potential cohort, and they soon met up. After listening to Dereck’s instrumentals, Alexis was immediately impressed and felt a strong pull to work with him. She ditched her Rhodes scholarship to focus on recording with Dereck, eventually putting together their Sleigh Bells EP in 2009.

They were both hard on themselves – and took their music very seriously. Their goal was to make a living off of their band – something they would ultimately achieve. After a few amateur performances, a good amount of press from prominent media outlets, and being labeled as “a band to watch,” they began recording their proper full length Treats.

My experience with Treats:

In 2010 I had never heard of Sleigh Bells – less their EP or upcoming debut project. My introduction came from my sister, who introduced me to the joy of listening to albums on vinyl. She was 16 at the time, right in the middle of her sophomore year of high school. Our parents had just divorced, and she took it incredibly hard. Instead of talking about it she acted out, something she had never done before. She broke into my dad’s new house when he was out of town to have sex with her then boyfriend, smoked as much weed as she could, stole liquor from my parent’s locked drawers, and was quite honestly a total asshole. It was complete hell living with her – she didn’t give a fuck about anyone but herself.

Our rooms were right next to each other at my mom’s house – and when she came home from school she played 2 records on her turntable over and over again. I enjoyed listening, as I imagined her in some sort of peace. Bon Iver’s self titled album, and Sleigh Bells’ Treats were in constant rotation. I didn’t listen to the actual music – but the muffled sounds from her shut room often comforted me. At least half a year went by, and one day I decided to knock on her door and try to talk to her. She was in a good mood at the time, and she was playing Treats. At the time I strictly listened to hip hop and the occasional R&B – so listening to it for the first time took me by complete surprise. Crushing guitars, an insane amount of energy, and the lightest vocals I had ever heard shook me to my core. Everything my sister was feeling at the time seemed to be lifted from her into Treats.

As I sat on the floor simply being with her, I felt a change as a sister and a listener of music. I asked for the download card contained in the sleeve of the record, and added it to my iTunes. For the next few months I played it every day, soaking in a side of my sister that I knew she would never share with me.

Treats is a gorgeous record. Not sonically, as it’s anything but calm, but in both Alexis’ and Dereck’s fearlessness to experiment with traditional music. The first single, Tell Em,’ is the opener, and doesn’t hesitant to smack you in the face. Spastic drums turn into a wailing guitar, followed by Krauss’ hauntingly beautiful vocals. You probably won’t be able to decipher her words without reading the lyric sheet contained in the packaging of the physical product. Although interesting, it’s not essential to the album. Throughout Treats, Alexis uses her voice as an instrument, countering Dereck’s eclectic instrumentals.

Track #2, Kids, is filled with Alexis’ groans and Miller’s beat, most akin to being on speed. It will shock you to your core. She oohs and ahhs her way thorough echoing distortion – even blending chipmunk pitched ad-libs. It is the structure of the songs that pulls the album along – becoming an addictive and exciting experience. Riot Rhythm is one of my favorite songs not only on the album, but of all time. My sister played this track the most, and after listening you might understand why. Bombastic, enthralling, and a near perfect execution of everything that music stands for.

When I review albums I often write that some, most, or all of the tracks are worth checking out – but Treats is different. Every song on the LP is not only worth checking out, but is essential if you are a fan of music. You’ll feel a roller coaster of emotions – never able to anticipate what’s coming next. Listen to track #6, Rachel, and it may just change your life.

Treats is a fairly short debut, clocking in at just over 30 minutes. This is part of the genius of the album. It will keep your attention – as over half of the tracks never reach the 3 minute mark. It was just a taste of what the duo could accomplish, and will leave you wanting more.

The reviews were near flawless, and rightfully so. Ever hard to impress online publication Pitchfork gave it a 8.7 – also naming it one of the 50 best albums of 2010. 3 more albums have since impacted. While the following 2 were less than stellar, their latest, Jessica Rabit is a return to the chemistry that both have been developing since their fateful meeting over 10 years ago.