FreshfromDE is one of the rare emcees who believes in the power of the “one emcee, one producer” formula. Last month he linked with Netherland’s based producer Roca Beats to put together a hell of an EP. Fresh not only wrote the entire thing, he assisted in co-production and and engineering. The Ritual is a mixture of everything from Hip-Hop, Trap, Boom Bap, and even elements of Pop, making this his most diverse piece yet. We wanted the details on the creation of the EP, how he linked with a dude out of the Netherlands, and the Delaware hip hop scene. Peep below.

Hey FreshfromDE, how are things going?

Great, this past weekend I opened up for Raekwon on “the wild” tour.  Got a lot of love playing and performing my songs from “The Ritual.”

We’re here to talk about your latest project The Ritual. First off, tell us why you decided to give it this title?

The tone of the project gives you a sense of “self-empowerment” and I wanted people to listen to it ritualistically to feel that message.  Whether its before going to a job interview or before going out to party, I feel like this was meant to be herd to give you that extra confidence in your self when you need it most.

You worked with one producer on The Ritual, Roca Beats. One producer, one emcee projects are far and few between these days. Why did you approach is this way?

This is actually the process I like to use when creating a project. I feel like it makes the composition more “complete” when doing it this way.  I really attack the sound I’m going for, try to explore different aspects, and push the limits of the type of sonics I’m looking for.

How do you know him? How did you initially link?

Well I initially found him online about 6 or 7 years ago on soundcloud.  I made a song to one of his beats then about 4 years later I go back to his music page and he has over 200 beats.  The beat i picked then was the beat for my “Aston Martin” song (video dropping soon).  After doing that song I was hooked to that sound.  I knew that I had to cultivate it for a future project.

You’re from Delaware. What is the scene like out there? I’m not familiar at all.

Because its the 2nd smallest state you could say the music scene out their is small.  Some people tend to have “small-town” mentalities and don’t go outside of the tri-state area, but their is talent there nontheless.  The 1st smallest state is Rhode island but unlike Rhode Island Delaware isn’t in a community of states like New England and DMV.  The Bordering states around Delaware is New Jersey, Maryland, and Pennsylvania.  Some of those states are sometimes associated with parts of Delaware but Delaware doesn’t have much of an identity music wise. I’m here to change all of that.

You incorporated all facets of hip hop in The Ritual. Is that a natural approach for you?

I think that just organically happened. I do a lot of different styles so things just panned out that way.  The fact that it happened organically might suggest it was natural but I didn’t go into the creative process with that plan

Are you inspired by any artists? I heard some elements of Travis Scott in there, and I absolutely love his music.

After listening to the project I defiantly hear the comparison to Travis.  Truth be told songs like “The Ritual,” “Can’t No Mo,” and “Weight in Gold.” I actually went in with the intent to make my voice sound like Future.

What were you listening to when you recorded The Ritual?

At that time I was really locked in listening to the last two songs on “The Ritual”.  “Moonlanding” and “Maison Margelia.”  I originally rapped the beginning verse similar to those two songs,  the rhythmic pattern is inspired from those songs as well.  That’s also where I got the energy for the ending chorus from. But I wasn’t satisfied with it, I couldn’t put my finger on what I didn’t like about it.  So I decided to re-record that verse with the auto tune using my “Future voice” and I added a bunch of harmonies throughout the song.

My favorite record on the album is Weight In Gold. Talk about how that came together.

That was my 2nd to last song I made for the project.  The last song I made was “The Ritual” and the 2nd to last song was “Weight on Gold.”  When I heard that beat the sonics spoke to me. I knew the musicality of the beat would fit the project (especially because I thought it sounded similar to “High on Myself.”) The concept of the song came from me freestyling over the beat, but it took me over a year listening to my freestyles to interpret the phrase “Weight in Gold” and apply it to a song. Once I found that one phrase things started clicking in my mind a lot easier.

What is your favorite song?

Unfortunately I’m like a lot of artists who love everything they put out but I can note a few things.

Fav Concept:  Aston and Matches Malone for the “super hero flow.” and Doin After for the mini story

-Fav beat: Weight in Gold and Matches Malone (I thought those beats went great with my voice.)

Fav Production: Cant No Mo (hands down my fav production from the features to the guitar.  The Guitar solos took the musicality of the song to another level)

The lone features are on “Can’t No Mo.” Who are Mac Notes and Ace Don? Why did you decide to get them on this record?

Mac Notez was in a recording session and was in need of some beats.

Side note: He was in a recording session with me. I also engineer, and I went to school in Boston to learn about sound and how to apply it to music. I record and mix all my music as well as Mac Notez’s and Ace Don’s music.

I showed Mac Notez some beats from my “Shelved Folder” (Folder of beats that I probably wont use.  They sit on the metaphorical “Shelf”) and one of them happened to be a Roca beat.  From their Mac was inspired to record only a half of a verse to it.  But me being the light of inspiration I went in the booth and recorded a chorus in that instant.  I wanted to make a real basic catchy chorus with some good passion.  I felt like if I put solid energy in the chorus it would inspire Mac to finish the song.  And he did finish….. one verse.  Mac ended the recording session finishing 1 verse and the beginning of a 2nd verse.  I was almost proud of him (laughs.)

Fast forward to the next recording session, he brings Ace Don, a mutual friend of ours and Mac proposes the idea to let Ace finish the verse.  I enjoyed Ace Dons music and liked his style but i was a little hesitant on adding him to the song (considering I haven’t added a verse either) and I was expecting Mac to extravagantly finish the verse.  But for the sake of the art and curiosity I wanted to hear what he had. BOOM!!! After he recorded the verse I fully saw the vision for the song.  “The song is perfect as is”  I said to myself.  For me its all about the feeling and the sonics, and for vocals I thought the song was perfectly balanced with Ace Don’s verse added.

After the vocals were finished a guitarist by the name of Leo Fama ended the song with nice background guitar riffs and a nasty solo on the outro.  Leo has played on a few of my previous songs and I knew he would do the song justice. The beat didn’t change up enough for me and Leo’s guitar added the spice the record needed to standout. 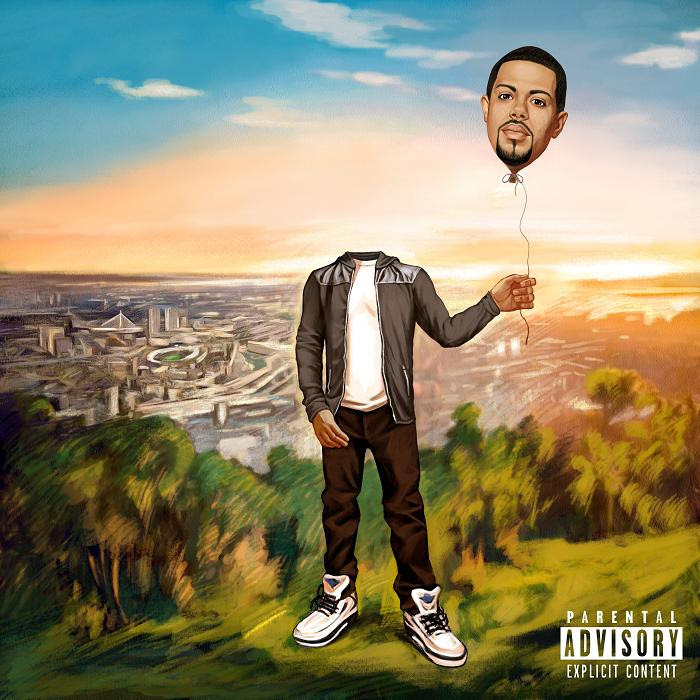 I’d lastly like to speak on the album art. It’s insane. Who put it together?

When I have my listening sessions I have a go-to creative team and they where the ones who listened to the music and put that idea together.  That graphic was actually meant for the “High on Myself” single.  Although the graphic wasn’t meant for the whole project it still works and the “High on Myself” concept easily sums together the projects message

Yep!! Be on the look out for the Aston Martin visual, and I want to say thank you for having me and those were great questions you asked.