Harlem emcee Don Mykel has been literally everywhere. He’s done Sway In The Morning and Shade 45 freestyles, received accolades from the likes of Hotnewhiphop, Vibe; and most notably premiered his March released Hunger Painz single on The Source. I didn’t reach out to him because of his popularity, but because I am a HUGE fan of his work. I’ve played his King Mykel: The Rebirth EP and God Mykel: The Last Martyr way more than a few times, and have looked out for new visuals and singles a bit obsessively. He’s different, he’s refreshing. To understand fully, at least play his newest song below.

We spoke with him about his coverage on the aforementioned sites, his upcoming project Infinite, his humble beginnings as a rapper, and much more. Enjoy below.

Hey Don. Thanks for hanging with us! How are things going?

Thanks for having me, everything gucci on this side thanks for asking.

No problem! Give us a brief intro on yourself.

My name is MyKel Infinite also known as Don MyKel representing The 23rd; and I’m from Uptown, NY.

Before we get into your music, tell us what’s going on in your world right now. How has this year treated you? 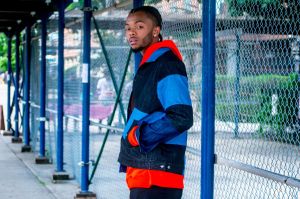 It’s a lot goin on for me at the moment with being back and forth from Georgia to NY, and just being in 545 mode. Putting that time into perfecting and expanding my craft. This year has been pretty good for me so far especially creatively. Since the year started I’ve been in another zone making some of my best music.

You’ve been all over everywhere, featured on Hotnewhiphop, Vibe, even getting a premiere on The Source. How did you get here? What does it mean to you?

I’ve got here by staying hungry, and staying loyal to my team. They go so hard for me and they’re a huge part of the reason I am where I am today. It means a lot to me that I’ve gotten at least this far but it’s not enough for me. My goals are high and I expect nothing less of myself.

Your newest single, Return Of The Don, has drawn a lot of buzz. We of course covered it as well. Tell us about it. Why did you put it out as a single?

Return Of The Don for me was like lyrical exercise. It was also a chance for me to reminisce on iller times when life was a lot grittier and how it has affected my mindset today. I put it out as a single to be a statement. Like the real is back. I gotta remind the culture that young wordsmiths still exist and we’re hungrier than ever.

You’ve been talking about The Infinite project for a little bit. What can we expect to find on it? When is that dropping?

Infinite is a journey into my current state of mind. You could expect transparency, pain and keen perceptions on today’s social climate. Sonically, you could expect to hear different sides of me as an artist. All in all, expect to learn more about me as a person. It’ll be out by the end of the summer.

I’ve been following you since the G.O.D MYKEL: The Last Martyr days. You took a risk with the cover, but I have so much respect for you for following your vision. How did that relate to the content? Who did the artwork?

The artwork for The Last Martyr is a clear representation of the world I created within the music. It’s like a book cover for this story that I’m telling. You’d have to listen to truly understand the cover. The artwork was ideally designed by myself. It was actually drawn out by my tattoo artist, @playboyink, and then digitized.

Let’s take it back. Where did you grow up? What was childhood like?

I was born in The Bronx, where I lived til I was 8. I then moved to Harlem where the majority of my family grew up. My childhood was filled with pain, joy and tons of creative energy. Both of my parents, throughout all our struggles, taught me and my 5 siblings love and expression. Which in turn resulted in 6 lil misfit geniuses. We all turned out to be artistic leaders in one way or another.

What music did you listen to?

Growing up I listened to everything from Soul, Jazz, R&B, Reggae, Pop and of course Hip Hop. My mom was a poet who could always carry a tune and my pops was a rapper/ producer. I’ve always had a home studio in my crib so you could imagine the vibrations in my home. Since a youngin I was consumed by music. I played the drums throughout middle and high school. My love for music started at a very early age.

You are from New York, the birth place of hip hop. Do you have close ties to your city? Or do you do your own thing?

Of course I have close ties to my city. Most of my friends and family are there. It’s still home for me no matter what. But I’ve always done my own thing. I’ve always been a leader amongst my peers.

Could you rap this well from the jump, or did it take time to develop your craft?

A lot of late nights and early mornings were put into my craft, and still to this day. Although my skill was cultivated naturally, I put a lot of time into mastering it. I still have not reached my full potential.

How do you feel about hip hop at this very moment?

Hip Hop right now when we’re talking music is in a great place. It’s more diverse than ever. But as an entertainment there’s definitely a lot of bullshit goin on but that comes with the territory. Me personally, I wanna be known for the music first. All that otha shit comes second.

Who do you listen to or look up to in the hip hop world?

My ear is very versatile. I listen to everything from Young Thug to Lupe Fiasco. I look up to all the pioneers and especially the greats that are still giving vibes to this day. I won’t name all of them cuz we’ll be here all day. But as far as the newer generation, I look up to Rocky, Joey Bada$$, Chance The Rapper, Tyler and a few other niggas who I feel have set the blueprint on how I wanna come in the game. On my own terms doing things the way I see fit.

#INFINITE IS ON THE WAY!! #NWO THE FIRST OFFICIAL SINGLE IS OUT NOW EVERYWHERE GO GET THAT AND PREORDER THE EP!!! THE CULTURAL REVOLUTION WILL BE TELEVISED JUUHURDD!!

Thanks for taking the time!